The end began with being told to talk amongst ourselves.

I guess the lecturer had had enough of coaxing a classroom of unruly trilobites to settle down and pay attention. Farrier science is a pretty dry subject, so was it any wonder?

We hadn’t counted on him being preternaturally good at his job. He knew exactly how to tame our youthful sass and steer us aright. Instead of admitting defeat, he drew a circle and square on the blackboard. He then jabbed a very pink forefinger at it, saying to the class, “Listen up, you obnoxious little tackers. This here is what you’re going to discuss.”

We gawped at these shapes as though they were arcane symbols of a bygone age. They reeked of a certain geometric mysticism. Or cabbala. Both options were frightening. As was the lecturer’s toothy grin.

“So, geniuses, what do your sparkling minds make of it?”

“The Deathly Hallows?” ventured one student.

“A manifesto for making horseshoes?” piped another.

“You’re getting warm, Ms. Satana!” The lecturer winked. “It has something to do with shoeing horses.”

That was a relief. My parents hadn’t paid a shedload of college fees for me to end up sitting in the wrong classroom.

The lecturer cast a bemused look over us. He poked the aforementioned pink finger at someone in the second row. “Mr. Pups. Tell me, what’s the shape of the head of a horseshoe nail?”

The student looked completely trapped, as though he’d been asked what kind of death he’d prefer. Hanging? Toxic injection? Students on either side shrank away, as if to remove themselves from the lecturer’s line of sight.

Someone snickered in the last row. The lecturer turned his head. “Do you wish to add something, Mr. Fernsby?”

“I’m not interested in your vacuous apologies, Mr. Fernsby. What shape is it?”

“You suppose? Come on, Mr. Fernsby. You can do better than that.”

“I only need to hammer ’em, sir. The shape doesn’t matter, does it?”

“An honest answer, Mr. Fernsby. There may be hope for you after all.”

Another voice chimed from the sidelines. “Nail heads come in different shapes, don’t they? They could be round or square.”

“True,” the lecturer shot back. “Even triangles, yes?”

The rest of us kept our silence. We were leery of provoking a new torrent of devastatingly oblique questions.

“Mr. Pups. Mr. Fernsby. I challenge you to a discourse. You, Mr. Pups, shall persuade us that a round shape is the only acceptable shape for a nail head. Mr. Fernsby, you are adamantly opposed to the idea, and ready to prove your point of view that it should be square. Clear?”

They looked at him, slack-jawed and pop-eyed. The rest of us were doing this too. I think we’d expected this lesson to be a cruisy one. So far, it had been anything but.

“Will this be in the exam?” asked someone from the row in front of me.

“Mr. Yelchin, your exam has already begun,” smiled the lecturer, one eyebrow diabolically arched. “Life itself is an exam!”

I hunched down in my seat, making myself as small and unnoticeable as possible. No way was I going to get caught up in this odd little game. I was a trilobite, not a philosophy major.

“Well…” Pups looked distressed. He always did have a slight stutter but now it was quite prominent. “The shape should be cir… circular because… if we compare a squ… square and a circle with a similar pe… perimeter… the squ… circle area will be bigger…” He frowned at his own timid assertion. “Or smaller?” The poor guy closed his eyes and muttered something under his breath. Obviously, he was trying to do the math in his tiny trilobite mind.

“Oh my god!” interjected another student. “Listening to you is making me dumber!” I think his name was Hermes. “It should be a square! A fucking square! Stop embarrassing yourself and sit the fuck down!”

An odd request to be sure. Pups was already sitting down. He hadn’t stood up in the first place.

“Shut your mouth, Henries!” Okay, it wasn’t Hermes. “Someone should remove the bullets ‘cos you keep shooting off with it!”

Henries’s face reddened—quite a feat for a trilobite. Our faces aren’t exactly there, if you know what I mean. “At least I don’t shoot blanks, coffin stuffer!”

A girl from the fifth row—I didn’t remember her name—squeaked, “Leave him alone! If you can’t add two and two then you need to shut up and listen! And anyway, it’s round because circles are sacred. Perfect. A heavenly shape! Everything should be circles!”

Another girl’s voice countered from the sixth row—sweet, yet acidic. How are girls able to achieve such a combination? “Yeah, Dafna, we can see that you strive for this perfect shape. You keep stuffing yourself with perfectly shaped donuts and pizzas!”

That’s when all hell broke loose. A furious shriek was followed by the scrape of chair legs on polished wood, then the sound of slaps. Everyone jumped up and started punching hell out of each other. I dived to the side, and made a beeline for the lectern. I hid behind it, watching with dismay total trilobite warfare!

The lecturer’s face broke out in a malevolent smile. He sauntered to the door, opened it, and let himself out. I followed at a discreet distance, baffled. Why hadn’t he broken up this massive fight? I observed as he sauntered down the hall, opened another door, and let himself in. Huh? I tiptoed to the door and peeped through the window to see what he’d do next. He was casting his eyes over a classroom of young dinosaurs—clearly idealistic, full of ambitious dreams, with plans for a brighter tomorrow.

I watched in horror as the lecturer went to the blackboard, took a piece of chalk, and wrote on it the dullest topic one could ever imagine… 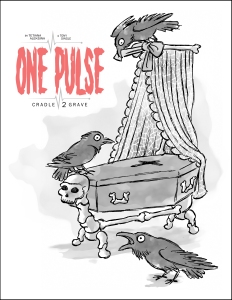