Once upon a time, there was a girl and a boy, and they got up to all sorts of mischief. No, they weren’t bad children. They would just get bored on a lazy Sunday afternoon, that’s all. Actually, they’d get bored any old day of the week – it really didn’t matter when. They were in constant need of stimulation to keep their creative juices flowing, much like overripe cows in want of round-the-clock milking. That’s why the boy and girl were always poking their curious, little noses into different things.

So, the girl and the boy were feeling quite nebby. They sat there, swinging restless legs over the edge of a bridge high above a river flowing with ideas. And the adults! They had such serious faces! Why were they beached there on the riverbanks below just doing nothing? Well, that wasn’t entirely true. They were writing books and editing magazines… which looked like important stuff.

The boy and the girl exchanged glances. While she had his attention, the girl gave the boy a cheeky wink. The boy gave a goofy grin in return. He was a bit shy. The girl’s heart warmed at this, but she didn’t let on. Instead, she said, ‘I bet we can make a magazine too.’ The boy piped up, ‘Can we?’ He studied her resolute face with a mixture of interest and bewilderment, and that’s when he knew she was for certain going to do something about this.

She grabbed his hand and said, ‘Let’s go!’ And so they sprang from the bridge and plummeted into the river of ideas. They didn’t even come up for air. Ideas were where they lived, so they definitely had the gills for it. Actually, that’s not entirely true. They had the gills, certainly, but they did come up eventually… and they had a big, wet magazine cover with them. It flapped and it dripped, but the girl and boy held onto it tightly, and they were proud. 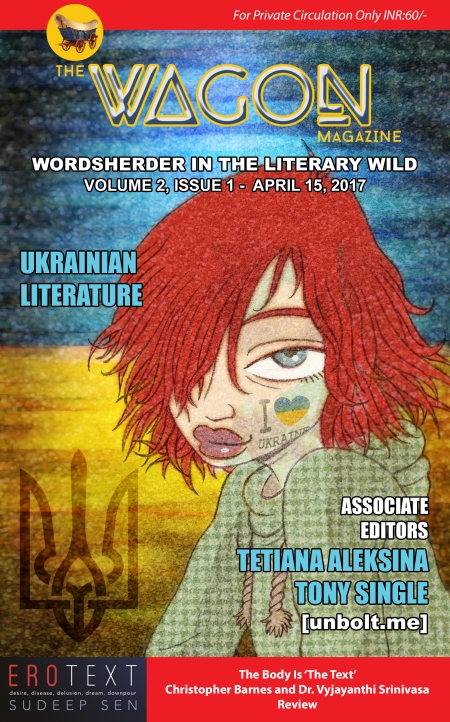 Words after words double march
in not just your war
Unwritten poems upon poems pile up
in bleeding hearts
…the squeaking hinges
let love in through the leaves
seize your pen my co- warrior
Press the ink, take a hit
This war soon be over
Heals writing; you are worth more than this

by KRISHNA PRASAD
© All rights reserved 2016