What am I doing here in this drear room in Bubastis in doom of shadow corner, so many sadistic strange faces? And who’s the witch that paces back and forth like she’s the frackin’ dream queen?

“Yeah! That witch is the bitch of war, my dear,” voice at my shoulder, and I shuddered. “She’ll dance and prance, but blood lust is a must for Bast; she just likes to drown her victims in fine wine first before lunging for the kill.” Light laughter. “Yeah, it’s her thrill.”

And the cats; I like cats, but their purring was alluring. Slap! “Bitch! Wake up unless you wanna be her boy-toy! She’ll suck you dry and leave you to rot in graveyard lot! Stupid man! I knew you needed me here; your haven is craven fear, right? Right! No might, no sight, no fight… Pathetic! Come here… No! Near, my love. Why the hell do you have an ear if you can’t hear?”

“Maftet, wife of Ma’at, but why in God’s name do you want to know? Just shut the hell up and stand behind me, kind of like you’re scarred, because you are ~ like an infant ~ far from home.” Wide shoulders, strong as boulders, silken hair, back bare and luscious. “Look! Her next victim, so unaware! Listen to her dictum, and the man is so blind! Men have always been, and there’s the purr of her cat to allure! Gods! I’ll rip apart the cats and make hats of hell ere I tear into her and chime Shai’s death bell!”

Bast like feline and soothed among cast and crew of old tale spun, told anew, unheard by little bird, “ah! but his mistress sees now how he’s ready to bow! Good so far; maybe she’ll steal him for her own meal, if she’ll stop drinking Bastian wine so finely laced, not benignly … Is she stupid, too; so putrid! She still doesn’t see!”

“See what?” Trembling. Assembling courage, but so damn pitiful in mystical presence of pleasance of Maftet, my savage protectress so ready to ravage … who? One and all to maul? Maybe I should crawl…

“The stich, my love-dove, so weak and bleak! The stitch on the rich bitch-witch!”

“Ha! No wonder! You blunder through life anyway; yeah! you need to stay with me, even after this day! You’re too damn blind to find your way; that’s how you stumbled into the gloom of this room in the first place, and with no trace beyond Ma’at … and she ought to have pity on you!” I moved closer to her back for lack of strength. Laughter, demeaning but preening, too. “Look! The stich covers more than a niche! At the bottom of her neck.” More laughter, this time cruel with some bloody drool. “You should’ve seen her before, just after… Star-knife slice and I made her a wreck!”

Instinctively I grabbed Maftet for fear… “It’s alright, my dear, just stay near… We’ve played this play many times before, and it’ll not be you who hits the floor!”

“Step back into black.” Of course I didn’t understand, but waited for no reprimand. “So sad Sia’s not here for you, too, for sheer knowing’s sake to make you wise enough to devise your own escape.” Maftet turned and burned into my eyes. “I see the hole in your soul, and you’ve no idea what’s happening now and how the cow’s readied for slaughter to the daughter of war… Ah! And the claws on more than paws; you don’t see that either, do you?”

“No.” What blow to what ego left; most of it bereft now. Hell! I still didn’t know exactly where I was, and wanted to tear out my hair, and there was no escape, only the misshape of fanciful ideas of…

“Wake up, stupid pup! And take your place where I told you to hide!” She turned on me wild with mild smile, like mother to child and I was beguiled. Laughter. Shake of the head in pity in city so glum, filled with scum. “You’re too easy, ignorant, but not sleazy… I think I’ll end up buckling you to my belt like a whelp to help keep you safe from the strafe of Bast, my little waif. And you would like that, too, wouldn’t you?”

Beautiful. Vicious. Even malicious. Could I help but love her, especially under such fierce cover?

“You’re caught, my love-dove! You’re no good at hiding your thoughts!” Laughter again in kinder tone with knowing shake of the head. “Instead, just be honest; don’t try to lie, or you’ll die. I’m the companion-defender of Ma’at, who sought my skill to kill all untrue and those who skew… But look now! The slick black cat licks and pricks the incarnation of Bast, not to be lost, for revelation of blood, elevation of fixation on oozing red! It’s an exhortation to exploitation of unsuspecting fool, thickheaded mule; perhaps she should consume? He’d only resume his stupid ways in more dull days in disgusting brain-haze!”

Let him die? And not even try…

“Dammit, I told you already! Are you so unsteady in your own mind and so blind? I can hear you, dear!” Fierce look; soul pierce. I wanted to cower under her tower. “Shut up, now, and look! This is how she moves and proves her prowess, what behooves you to comprehend ere you bend to her feline ways on cloudier days in maze of confusion and dark illusion. I’ll not always be with you to correct, protect, and deflect all danger from the ranger of hell.”

Maftet grabbed and held me, nabbed my neck to beckon me listen, looking at glisten-face. “If I were to lie, my lies you’d believe just looking in my eyes, and you could not even try to resist what I insist… but why? You know so little, your spirit so brittle, but I’ll not belittle; after all, only last Spring did you sing your first babe’s song and sigh so nigh strong breast, sweet milk to drink to sink to peaceful sleep in protected keep. How, then, could you know, could you really see here what there is to see and the degree of malice from ages foregone, hidden behind devilish curtains drawn?”

“What don’t I see here in this place so drear? There is Bast; there is man; there is cat. There is dæmon cast, evil plan, and ghoulish feline rat! What more to even the score of what I know as I forego this awful trek bedecked in thin veneer under sneer of deities old and ere so cold?”

Kiss. Shockingly gentle. Smile … kind. “I am not blind but you I will bind to me to be mine at least till we leave the awful beast and grime-ridden place in Bubastis, however slow the pace. But look again and see; remember I said the claws are on more than paws? The two are one, and one is two; it’s true. Aton summoned Sekhmet and Bastet ~ her full name ~ in blame of war and violence, to deplore the double-whore of mindless defiance of peace, commanding all battles to cease; so they converged and merged, struck their blow upon Aton to show the power of unabated hate, and crash the tower and smash every bower of Ennead, but the champion of the pantheon was Ma’at, and she chose me as mate to satiate the anger of Aton and remove all danger of dæmons so loud and proud, who drain stupid men who cant think above notch of the crotch! Do you now more understand, your soul expand to see how out-of-hand is this deific grandstand of wretched whore-war band?”

Ah! But Bast moved again … surreptitiously, expeditiously, suspiciously, but oh-so obviously ambitiously. Ready for the thrill of the kill?

by JONATHAN NOBLE
© All rights reserved 2015 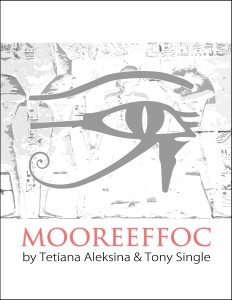