We had a conversation, and like so many of our conversations it took an unexpected detour. And so we ended up travelling along a byroad of riddles we both knew from childhood. This then led us to devise some riddles of our own, with the added rule that they must be six words each—no more, no less. See if you, Dear Reader, can guess the answers!

PS: It was quite tricky to come up with these by the way!

Dry when wet, soaked when parched. 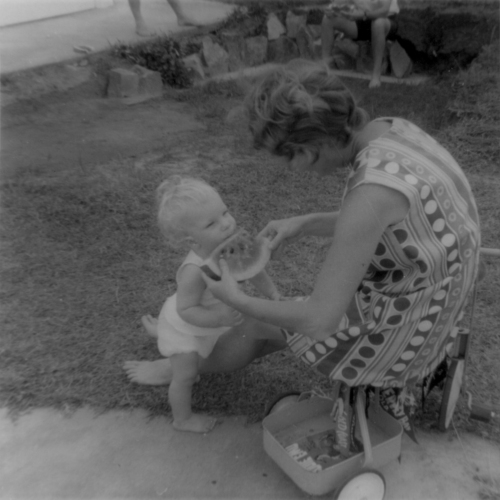 This is a tribute to my Mother.

My Mother, who has always been there, for my Father, for my Sister. For me.

As I edge towards the end of my fifth decade of life, I find myself thinking about all that she must have done and seen, all that she must have lived through that I will never know about. What was it like for her before me? And what was it like having to give birth to a deformed child? And yet she nursed me. She raised me. She taught me to be a good boy. She loved my face.

She was there the day I discovered my Father could cry. My Sister poked gentle fun at her for falling asleep watching television. And she’d listen patiently as I babbled everything I thought my teenaged self needed to say. Of course, I’d figure it out eventually, whatever it was. It was just nice to know that someone cared.

She welcomed my soon to be Wife with open arms. She grieved on the day I married and left the nest. We continued to hold hands over the telephone. Her heart never abandoned me, my Mother, who was kindness personified. Who I strive to emulate.

And now I see that time has caught up with her. Now she’s a ghost of her former self, no longer the woman I grew up with, looked up to. Kindness personified has become a slow and drawn out forgetting. She is reduced to haunting the shadowed halls of her oldest memories. I hope at least it’s beautiful there.

Is it supposed to be like this? Is it not enough that we die? Must we also be stripped of everything we are and hold dear? Must we be taken away before we’re truly taken away? Yet we live like there will be a tomorrow, hopeful in the face of certain oblivion.

For my birthday this year I want the impossible gift. I want her disease to be lifted, thrown away. I want my Mother to live well into her nineties, happy and full of years. I’m not ready to let go.

I wish you could have met my Mother, back when her spark was compassionate and bright. But she is fading now, and most likely won’t remember you. My Mother, who loved my face. Who stooped low for me. Who fed me watermelon.

by TONY SINGLE
© All rights reserved 2020

On these damp and grey November days I think
Of things that should have happened but never did.
Of conversations that were never spoken
Afraid to raise the memories from the dead.

Of the questions that were formed but never asked.
Of the the horrors that were felt but never breathed.
Of carefully made plans that never began.
Of the dreams discarded like old newspapers.

I should’ve told her how he was hurting me.
I should’ve screamed and kicked and made him stop it.
I should’ve bit down hard when I had the chance.
I should have cut his throat as he slept at night.

I never developed a strong sense of self.
I never knew who I was supposed to be.
I never learned to trust my intuition.
I never really understood my feelings.

All the wasted time of wishing I was dead
All the years never truly daring to live.
All the hurt I’ve done to others in my rage.
All this time I’ve let you walk around unharmed.

Now here I am still broken but not giving up.
Now I know my childhood was stolen from me.
Now I can survey the damage done to me.
Now I’m going to take the final fight to
you.

On these damp and grey November days I know
The things that should have never happened, but did.
Of the revelations that were never heard
It’s time to raise the memories from the dead.

by RICHARD GREEN
© All rights reserved 2019

If a book falls into my hands by itself
and says, “Read me, bro!”
would I really bother?

by TETIANA ALEKSINA
© All rights reserved 2015